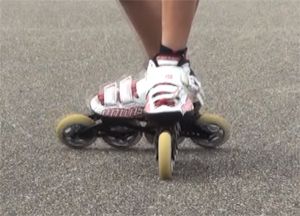 Braking is one of the techniques that require the most effort from many skaters. While it is relatively easy to learn to roll and achieve relatively high speed, learning how to stop on roller skates is a little more difficult.

Oddly enough, many skaters who ride the streets do not know how to brake safely. With this they not only endanger themselves but can also cause serious accidents, forcing other pedestrians or even cars to brake or run into things.

On many occasions we see skaters holding on to streetlights or to the traffic light pole at an intersection because they have not had time to stop their roller skates before the phase change at the traffic light.

Most amateur skaters ride at speeds of between 15-20 km / h. Downhill they quickly get up to 40 km / h and even if they don’t reach the peaks of a professional, this speed can already cause serious fractures in a fall if they don’t know how to stop on roller skates.

Most skaters end up grooming themselves in some way, but few are able to master braking techniques safely. Therefore, learning how to stop on roller skates should be the first thing practiced as soon as you have learned to keep your balance.

There are different forms of braking. They all manage to stop your motion, although some do not work for hard braking and others burn a lot of rubber from the wheels. You should familiarize yourself with a few basic techniques and master at least one of the braking techniques.

Outside at parks or specific areas for skaters, there is always a small slope, unevenness that we do not notice on foot but that on skates can cause immediate acceleration. The more speed we gain, the more length in the braking path we will require. The braking path is formed from the reaction time and the braking distance. On skates, it is necessary to coordinate difficult movements, change the posture, and the direction of the weight so as not to lose balance. This costs reaction time, and when braking starts properly many meters have already been lost. Therefore, on skates, the braking distance is much greater than on a bicycle.

For all techniques, it is advantageous to adopt a slightly forward-leaning posture. This provides security and stability, as the body’s center of gravity approaches the ground and we are better prepared for eventualities.

It also helps to keep the central position on top of the skates. If we increase the center of gravity we will fall behind, if we advance too much we will always be taking steps forward so as not to fall face-first to the ground.

The heel or pad stop technique is very effective and the safest to learn. It is not the “coolest” or colorful, but it stops the roller skate well. Obviously, roller skates with brakes are needed.

The brake pad is the safest and easiest to learn to brake with skates. The brake pad is used, which is normally found on the right skate. To slow down we bend our knees a little as if we were going to sit down, while we stretch the leg of the skate with a cleat. Now we unload the weight on the front leg and raise the back of the skate of the straight leg in front of us. This way we press the rubber of the brake pad against the ground and brake. The more pressure the stud has, the easier it is to stop the roller skate.

This braking technique is performed regardless of whether the skates have brakes or not.

At moderate or slow speed it is a fairly effective technique. The stretched-out legs are spread out while the toes are turned slightly inward. It looks like ski braking. Without letting the legs come together, the points inward slow down the whole body.

Brake with the T or T-Stop

The T technique is to delay the back skate and put it at a 90-degree angle behind the front skate. The skate leans and the wheels of the laced skid graze the ground and brake. The weight of the body falls on the front skate. The further the skate is stretched and with it the more inclination the back foot has, the greater the brake effect will be. It is convenient to press more with the heel than with the front wheels of the brake shoe.

This technique requires more braking time and distance than braking with the pad. It also wears a lot of rubber on the wheels of the right skate unilaterally. Still, it is a fairly common and effective technique, provided that the balance is mastered and the delayed skate is not uncontrolled.

The braking T has a risk point: If too much weight rests on the front wheels of the rear foot it can result in a circular motion. This can lead to falls and sprains. To avoid this, always take into account leaning on the front foot and try to brake more with the rear wheels of the T-shaped skate than with the front ones.

Another risk point is not to support the skate perpendicular to the front skate and thus go to one side.

And finally, if this technique is used with a skate that has a brake that protrudes a lot from the skate guide, it can scrape the block on the ground and thereby leading to loss of balance if the rear skate is tilted too much when braking or does not lean straight.

This technique is very effective but only suitable for advanced skaters. It serves to brake at high speed but requires full control. Braking with Powerslide not only requires a lot of experience but also wears down the wheels a lot. Of course, it is visually impressive and that is why it has a certain appeal for some skaters.

There are several ways to do it.

Before starting the brake movement, make a small jump to change direction as if you were going to skate backward. Looking ahead and push the brake leg in counter-direction. This causes the wheels to rub off the ground and when changing direction it stops quickly in a short distance.

Another way is if it is not turned as much, but the skates are put at an angle of 90º and it is braked.

In this case, the skater transforms the forward movement into a turn and skates in circles, putting one foot on the other until he loses momentum and stops.

This type of braking is not very suitable for high speeds, but it is elegant and uses little wheels.

It should not be done until the speed has been lost or you can go out into the air. Therefore, it is not very suitable for hard braking, although it is good for stopping on roller skates when there is little braking space but there is enough width.

This braking technique is similar to spinout, but without moving the skates one in front of the other. You skate in an arch in which the heels look at each other and the feet almost form an angle of 180 degrees. This way you skate in a circle without moving from the place. If you skate with the wheels tilted outwards it is more stable but less effective. This type of braking takes up a lot of space, as you convert forward inertia into a rotary motion.

If the skates are not mastered, you will quickly end up on the ground, which is also a way to stop, although less pleasant.

Crossover Stops or braking in circles

This technique is used both skating forward and backward. The skater almost crossed his legs in a curve. The smaller the radius of the circle the easier for you to come to a stop. The brake results from the turn and the change of course. The more you press on the outside of the lagging skate, the sooner it brakes.

What follows should not really be called a braking technique. These are tricks and emergency maneuvers that are used when one does not really know how to stop on roller skates. Unfortunately, it is the most common means of stopping for many skaters and it is seen too much around the city. They are techniques of last resort, like jumping off the running train or dropping a burning paper.

This at low speed can be harmless compared to tripping over a wall. If you manage to slow down until you roll very slowly and are provided with protections, a controlled fall is easier than uncontrolled braking. In principle it can be dropped forward, resting on the forearms and knees. Only if clear protections are worn, otherwise it is better to stamp against the wall. Among other things, dropping in a controlled manner also serves to lose the fear of falling.

It consists of holding on to a lamppost or a tree and is only effective when skating slowly. As soon as there is some speed at play, we can seriously injure ourselves with this. Although it may seem like an easy solution at first, you should always avoid having to turn to a tree or lamppost to slow down.

It is effective, but it is neither elegant nor always harmless: It involves the skater moving away from the paved road and landing on the grass, gravel, or any other terrain that is on the edge of the skating rink. With the weight on the central part of the skates and one foot slightly forward, we try not to lose balance and manage to stop. This only makes sense in places with grass or sand. In practice, they end up jumping or jumping on the grass until they have stopped and stopped.

Whether or not you know how to stop on roller skates, those who don’t want to risk bone fractures or chafing will prevent falls and a lack of braking technique with protections. The wristbands, elbow pads, and knee pads are essential. But also if possible padded pants or jersey in the hip area.

Plussizeawe.com is a participant in the Amazon Services LLC Associates Program, an affiliate advertising program designed to provide a means for sites to earn advertising fees by advertising and linking to Amazon.